What is the MigreS Program?

The ultimate goal of the Migres Program is to follow the population changes and migration of raptors and storks (soaring birds), marine-birds and songbirds both in Spain and in the rest of Western Europe.
This project is financed by the Regional Government (Consejería de Medio Ambiente, Junta de Andalucía).
The special characteristics of the Strait of Gibraltar are used as a bridge by hundredsof thousands of soaring birds on their voyage between Europe and Africa as well as between the Mediterranean Sea and the Atlantic. This makes the Strait an excellent place to study the phenomenon of migration.
The base for this study is formed by the observations made by the volunteers, which do their job with the technical guidance of the coordinating team, making use of all the infrastructure necessary to work as efficient as possible.

How does the MigreS Program work?

There are a lot of methods to study migrating birds and to use one or another mainly depends on the information you want to get. Because of the limitations set by the program objective we study postnuptial migration, using count methods.
This kind of study has to be standardized for comparison between years, and to have statistic meaning. The data have to be collected always in the same fashion, so that the study can be repeated every year, the longer the program is continued, the more reliable its results will be.
With the experience gained during the first year of operation of the program a “constant effort” monitoring scheme was set up, which adheres to all the previously stipulated conditions. Although this “constant effort” monitoring scheme has been tested in previous years, it is possible to make improvements. Therefore a series of additional observations are made which allow us to gain a deeper understanding of the migratory behaviour of birds, putting special emphasis on the influence of meteorological conditions on this behaviour. 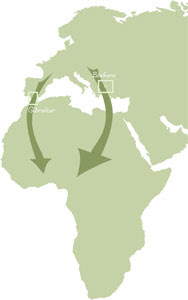 Visitas around the world